Straight European Lacing is a traditional method appears to be more common in Europe. The laces run straight across on the outside and diagonally on the inside. Sometimes referred to as “Ladder Lacing”. 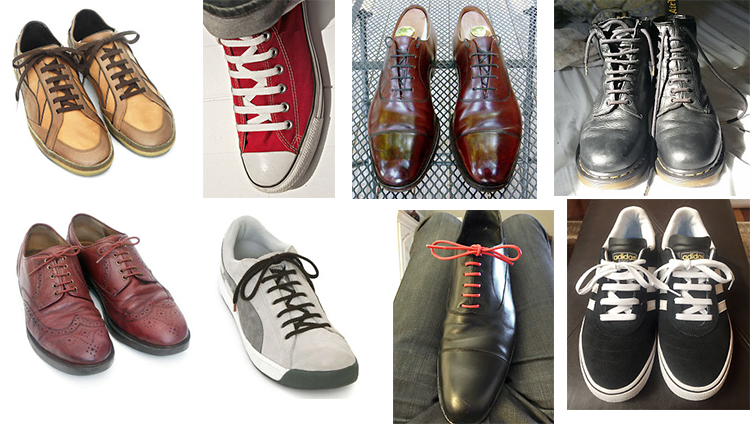 How to straight european lacing?

• Although visually messy, the underlying zig-zag makes this lacing very tight & secure. The mess is mainly noticeable on shoes and sneakers with a wide spacing (as seen in the first photo below).

• Straight European Lacing is particularly suited to dress shoes such as Oxfords / Balmorals, as it allows the uppers of the shoe to come completely together in the middle without bunching or corrugation. On these shoes, the underlying zig-zag will be completely hidden (as in the second photo below).

Like other straight lacing methods, Straight European Lacing has an additional benefit for sporting or military use: The upper horizontal sections of shoelace can be quickly cut through with a knife or scissors in order to more easily remove a boot from a broken, sprained or otherwise injured ankle or foot.

Note that most military forces have regulations for just about everything, so I’d recommend that military personnel check before they adopt this – or any other – possible non-regulation lacing method!

“I’ve attached some photos of my Church’s dress shoes with the Straight European Lacing method. I like it. It’s a little messy underneath, but that’s why I like it. It gives the ordinary straight-bar look of the classical oxford lacing a bit of edge — some credible vibe.”

“In the past I was using the straight bar lacing because I was used to shoe where we could see underneath. It made my shoe very hard to tighten. With this new lacing, I am liking my oxfords more and more ! :)”

“My father lost his right hand in an accident at 18-years of age. Having been a right-handed man, he needed a way to hold laces in place while tying his shoes. He tried many lacing methods before happening on what you call European. This method of lacing holds the shoe together without slipping loose so he could tie one-handed with his left hand. Before his death at age 89, he thought [sic] his method to many others handicapped by accident or injury, including many disabled soldiers.”

“I did the straight European lacing on a pair of shoes with 5 pairs of eyelets, but when finished, one end of the shoe string is longer than the other. Is it supposed to be this way? The technique works fine on my shoes with 6 pairs of eyelets.”

Over Under Lacing Method

Over Under Lacing Method Over under lacing method reduces friction, making the lacing easier to tighten and loosen plus reducing... read more

Shoe Lacing Methods Mathematics tell us that there are more than 2 trillion ways to feed lace through the average... read more

Gap Lacing Method This simple variation of Criss Cross Lacing skips a crossover to create a gap in the middle of the... read more